Often clients call and ask me if it would be more economical to buy a new sofa or reupholster one.  Off the bat, I can tell you the cost is roughly the same. It’s not a decision regarding economics. It’s a purely emotional decision. In all my experience, the most common reasons have been:

“It’s the most comfortable sofa in the world.”

“I want to be environmentally conscious.”

“It fits perfectly into my space.”

But my reason was purely sentimental. 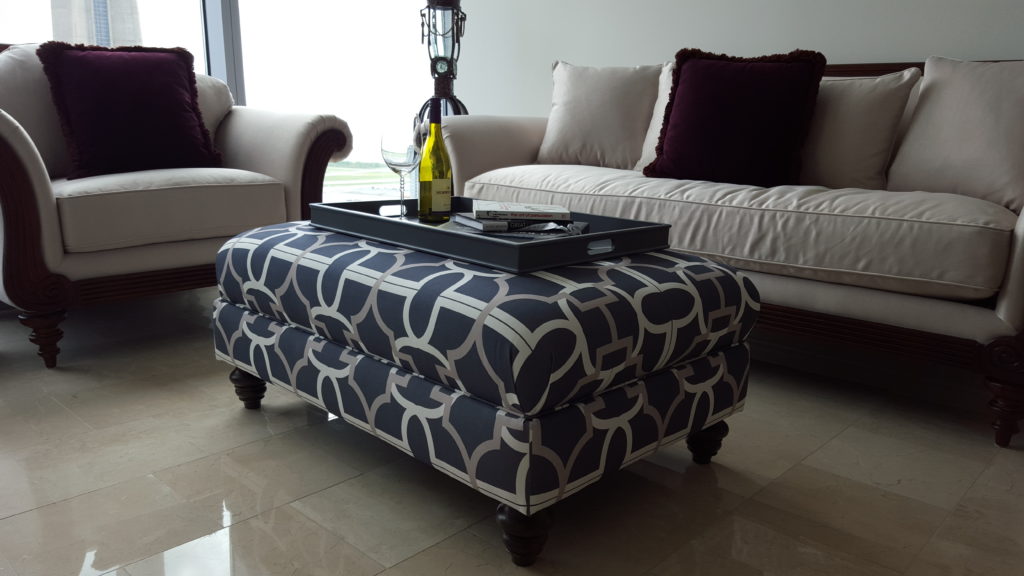 My Grandparents and their sofas

I grew up in Montreal. Dollard to be exact. Just about a 30-minute drive from my father’s parents who lived in the village of Mont Royal.  They lived on a nice, tree-lined, low rise apartment-lined street. They lived there for 30 years. From my early childhood until just prior to my marriage, I spent almost every Saturday with them.

They owned a diner on St. Laurent.  It was called Irv’s diner (the previous owner’s name), and my father would drop me off in the mornings on his way to work.  At the end of the day, we’d hop in a cab and head over to their apartment where I’d eat too much chocolate, and hear stories of the war, their childhoods and the crazy things my father did as a child.  When I look back, it was heaven. I can still smell the chicken soup.

I slept over many of those Saturday nights. Often with my younger sister.  They had a guest room, but there was only a twin bed in it, and it was super hard and uncomfortable.  We slept in the living room. I, obviously being the older one, always got the sofa, my sister the small loveseat. Good thing she was small at the time!

That sofa, all tufted and velvety and smelling of cigarettes and almonds, was the most comfortable place for me.  It represented so much more than just a place to sleep.  It was cozy and two rooms away from the two people whose love I felt as easily as I breathed.  That’s their job, isn’t it? Grandparents and their grandchildren. It’s a love-fest.

My grandmother had recovered the sofas herself, about 15 years after she got them. They went from red floral to blue floral. She stitches every stitch herself. I have no clue how she did it. I don’t have her talent with a needle and thread.

As the years passed, my grandparents had to move in with my aunt. They couldn’t do it themselves anymore with failing health.  The sofas ended up in a basement.  I wanted them badly, but my aunt had boys, and a house, and my grandparents! They stayed in that basement fo several years, as my grandparents moved in and eventually passed away, only months apart. They witnessed teenage boys, grown men watching football, children watching movies, more sleepovers, and when I was in town, heartfelt talks.  But they grew tired. Their fabric threadbare. Their springs poking through 30-year-old lining.  And eventually, no one sat on them at all.

My aunt called me six months ago.

“You want them? Come get them.”

So, I did. To everyone’s quizzical looks, my husband and kids and I drove to Montreal, rented a trailer and packed up the 2 sofas. Well, my aunt threw about ten additional boxes into the trailer…but that’s another blog.

“Why are you going to get them?” my mother asked.

“Are they your style?” my sister asked.

“Really, you are coming to get the sofas?” my cousin asked.

But they aren’t sofas. They are memories. And, they are beautiful.

It was a no-brainer to leave the worn wood as it was. I prefer the look of it being lived-in and passed down. The fabric, on the other hand…

I spent 2 months searching for the perfect fabrics. Fabrics that had water and soil resistant properties so my children could use the sofas without me stressing. Fabrics that working with my home and wouldn’t allow these antiques to feel old. They needed to feel like me, like my grandmother, like heirlooms, and like today.  That was quite demanding of me.

But I did it. And I love them. I used a terrific fabric through Alendel fabrics that has “revolution” technology. It will last until I am sick of it. And I backed it with another find by Maxwell fabrics, with “Crypton” technology. Equally kid and dog proof.

I wish I had a before photo of the sofa. The only ones we could find were very old and poor quality. 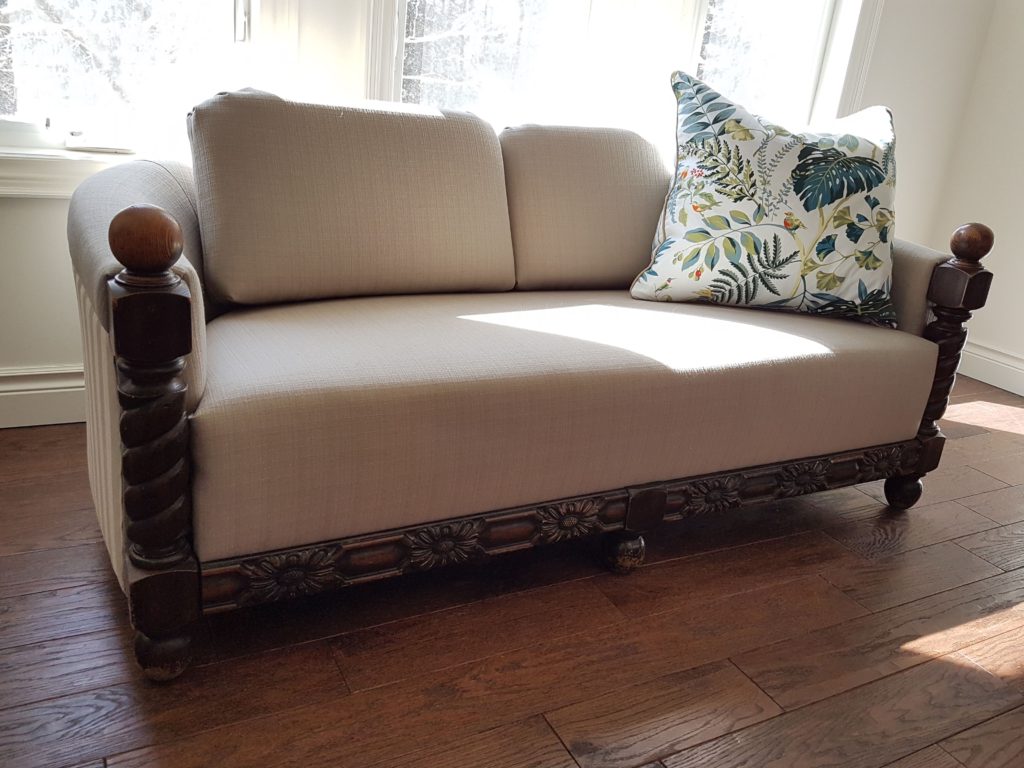 When I look at them, they make me happy.  Snuggling on them with a good book makes me feel close to the grandparents I loved so much. It reminds me of my father, when we were young, and he was still here.  The closeness I feel cannot be replaced with a brand-new piece. It’s priceless. To be completely honest, I found my 9 year old daughter curled-up, asleep on the loveseat last night. I almost cried. No one has slept on it in 25 years.

Reupholstering a piece of furniture is more than economics. Just so much more.

So the next time you are about to toss out your favorite chair, or your mother’s settee, keep in mind: what is old, can be new again. And memories are priceless.

Have a terrific day!

TRADITIONAL DINING. When we recnfigured this main

GIVE BACK. This is year 20 of going to St. Michael

BEST SPA EVER. So it's Saturday and my nails were